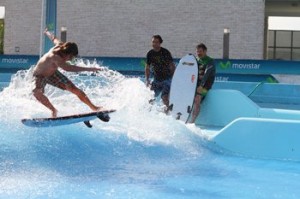 There is now an app for making waves.

American Wave Machines of Solana Beach designs pools with technology that creates waves big enough to surf on. They can bring the familiar sport to places that are nowhere near the ocean.

Among the company’s latest innovations is a way to modify those waves with an Apple Inc. iPhone or iPad.

Standing before a miniature, tabletop wave pool at the company’s headquarters — just a few steps from the Belly Up Tavern — company founder and President Bruce McFarland demonstrated the variety of waves he can turn out by changing the settings on his phone.

Then, he invited a reporter to try out the controls, on a console with a tablet-sized computer screen.

By manipulating the shape of the wave on the screen, a person can modify the wave emitted by the machine. Press a button, the air-operated system makes some noise and, voila, the wave breaks. McFarland sizes up the result. “You made a mushy wave on the right side of the pool,” he said. 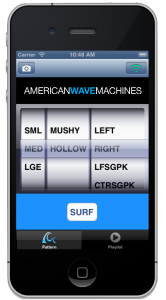 The app will work the same way on the full-size wave machines that McFarland and his company engineer.

American Wave Machines was founded in 2000 in McFarland’s home. Its machines are now up and running in Peru, Sweden and the Caribbean region.

“We made it through the recession with international business,” said McFarland.

American Wave Machines holds seven patents, and it has applied for several more in the United States and overseas.

One of its more ambitious projects is a wave pool at the Russian resort city of Sochi, the city that will host the 2014 Winter Olympics. The 35,000-square-foot pool will be part of the Sheksna Resort, and will offer a 10-second ride.

Another buyer is the owner of an amusement park in Nashua, N.H., 40 miles north of Boston. The customer is putting the wave machine indoors, in a space with a retractable roof. The attraction will complement other rides at the park, including technology that lets people “skydive” in place.

Depending on the technology, American Wave Machine projects can cost between $500,000 and $15 million. And the company can not only supply a park with equipment. McFarland says it can also help formulate business plans. 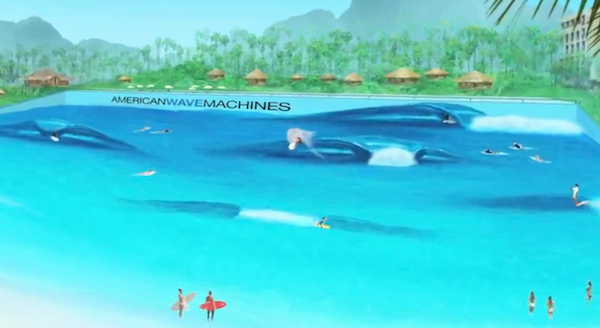 The SurfStream is more compact and reminiscent of a treadmill. It can produce a small wave for beginners or a barreling wave for advanced surfers. Detachable modules get the wave to break to the left or to the right, depending on the rider’s preference. The waves continue to churn for as long as the machine is running.

By contrast, the PerfectSwell machine sprawls out over a large area. It sends waves across the surface of a pool at regular intervals, and those waves peter out at water’s edge.

Unlike other products, the wave machines accommodate regular, off-the-rack surfboards with fins. “It’s beyond a simulator,” McFarland said.

Financing a water park has been a challenge during the economic downturn, said Aleatha Ezra, director of park member development for the World Waterpark Association in Overland Park, Kansas.

International development, however, has been strong, she said. Asia has “a burgeoning market,” Ezra said, while Europe and the Middle East are also strong.

American Wave Machines can claim one other innovation: It built a wave machine that was part of a float in the 2012 Tournament of Roses parade in Pasadena. 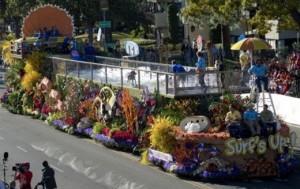 It was the longest and heaviest float ever entered in the Rose Parade, McFarland said.

Going forward, McFarland is enthusiastic about his wave machines’ potential.

“There’s room for at least one of these in every major city,” he said.