When Peter Townend and Ian Cairns stumbled into coaching the U.S. NSSA team back in 1980 he definitely was not expecting to coach the first Chinese Olympic surfing team in 2017, let alone train them in a wave pool in the Basque Country. 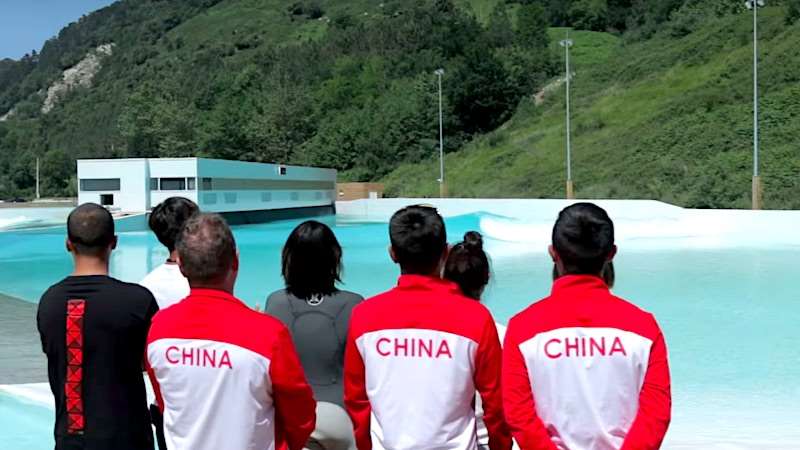 The Chinese Olympic team watches as The Cove does its thing.

PT has coached the Chinese Olympic surfing team for over a year now on Hainan Island and beyond. As far as the future for growing the sport in China he said “Wave pools in China?” as he half raised an eyebrow, “It’s more a matter of which ones.”

For those that don’t know, China’s surfing future won’t only rely on pools. PT wants people to know there’s more to China then polluted water and a wall. They get pumping surf, and it’s as beautiful as Fiji. “There are sand points, like the Gold Coast, and there’s nobody around! You walk through the jungle and come out onto a pristine beach – and it’s empty.”

There are 400 million people that live near the coast in China. Someone is bound to be a pivotal piece in China’s surfing history. Though not all of them will have access to good or clean oceans, they still have hope.

It seems like using pools in China as a proper way to train is just a matter of time. However, first the pool needs to be selected. PT is hoping for the Wavegarden style as opposed to KSWC.

“Kelly’s might be too advanced for this crew. Plus the Cove is shorter and more coachable” says Pete. As time goes on and the Chinese improve their surfing- which they will, maybe his mind will change.

“Everything they’ve learned about surfing comes from a video” says Pete. “They all tend to push off the front foot like they are skating”.

“I get them to put an ankle weight on the back foot when they surf, just to remind them it’s there, so they don’t forget to use it.” – With tactics like this, it’s easy to Imagine the skill that will arise from consistent coaching and practice in a wave pool.

All of the pools are a back-footed surfers heaven. Steep, tight little turns, cranking compressed pocket snaps and hacks.

China is trying to do what they can for the surfers however, they’ve been misguided in some efforts. For example, the boards that they’re riding in the video are from California. The team went last September and the Government handlers that run the surfing program thought that they could just buy fifty 5’11”s at a bulk price for the whole team.

“The Government struggles with individualism” says Pete. Everyone is learning throughout this process, not just the athletes.

Nonetheless, they are looking to take the Olympics. They plan to expand the team from the Hainan Island crew and set up other teams in five mainland provinces. Each province wants to get ahold of the best national prospects, which has created a bidding war.

They’re even recruiting top athletes from other sports. When asked about future coaching opportunities Pete Said, “There’ll be opportunities for guys to live in China and make good money.”

But he’s not there for the money. Pet Townend influenced and evolved surfing in his earlier days, now he’s doing it in a different way by pushing Chinese Olympic surfing. “It’s the challenge. For us, the surf culture has been around for a hundred years. When you’re in China, you feel like Duke Kahanamoku.”