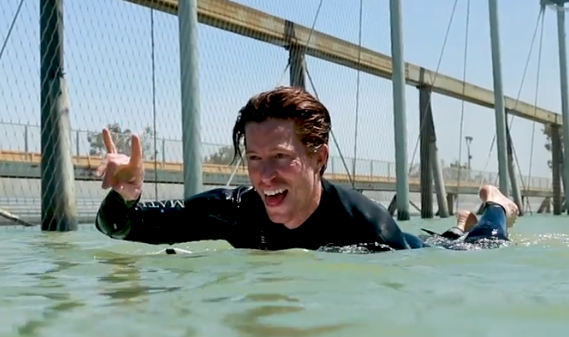 These two are legends of their sports and they both have something on Slater.

White and Hawk are both more than talented on other types of boards than the ones that made them famous. Not that Slater can’t skate or snowboard but Shaun White has taken home gold medals from the X Games in both skating and snowboarding. Tony Hawk can get barreled but doesn’t hold any achievements in surfing or snowboarding. As far as we know, there are no videos of Slater doing an air out of a superpipe.

Shaun White surfs quite well as you may already know. It’s hard to believe that he’s never been properly barreled given his long history of surfing. Tony falls right behind by saying the same thing and continues by saying that his surfing improved more in one session at the Surf Ranch than it has in the last five years.

The Founders’ Cup just left Leemore and acted as a sort of “lead up” event to future Olympic Surfing Events. As the show rolled out of town these two legends rolled in. Skateboarding also will debut in the Olympics in 2020 and Shaun is excited about that. Being an X Games medalist, Shaun said that he would love to qualify for an Olympic event. Kelly is also trying to qualify for surfing, which is almost a guarantee, but anything can happen. Either way, Kelly wants to see the Olympics happen in one of his pools. The race for the Olympics is already on and word has it that KSWC is putting ink to paper somewhere in the Tokyo area trying to make that happen.

Getting so(rta) pitted at #wslsurfranch alongside @eddieveddermusic @kellyslater & @shaunwhite. Thanks to @wsl & @kswaveco for this incredible opportunity. I promise to stalk the Surf Ranch gates respectfully in the future. ⚙???‍♂️

“A few days ago, worlds collided in Lemoore in a day dripping with Olympic subtext. The Founders’ Cup just rolled out of town. White, a medal-winning Olympian was on deck. So was Tony Hawk. Recall skateboarding also will debut in the Olympics in 2020, and White has even said he’d like to qualify….” Click here to read more