You can look but you can’t touch, for now. 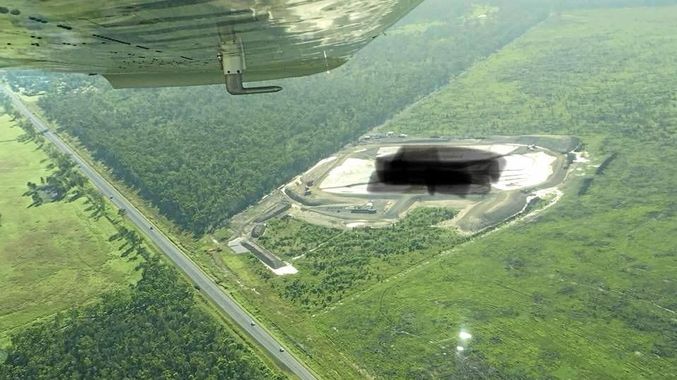 This is no mistake, the details are blurred hide Surf Lakes prototype secrets. This shot by Neil Richardson puts the actual size of the Surf Lakes test facility into perspective. They’re getting close to completing this massive project, inside of a couple of months they say. However, as we learned during the interview with Occy and Aaron Trevis the site won’t be open to the public for some time. The Surf Lakes technology will be the first functional wave pool of its kind in the world. No other design is similar or has the capacity of this one.

The size of the area in which the ‘pool’ occupies is 200m x 150m, which doesn’t seem like much to the mind. However, the aerial view puts it all into perspective, showing that the location looks more like a stadium than a wave pool. This is not for nothing though, Surf Lakes has packed eight individual waves into this machine. The end of construction is just a couple months away but won’t be open to the Australian public for awhile. The site is approved to be used for demonstration purposes only over the course of the next year. The main goal is to demonstrate functionality, further investments and approvals are needed to open up as a commercial site.

Starting in the next couple of weeks Surf Lakes intends to inform potential investors.

“We will be doing a series of information sessions about the project over the next couple of weeks, beginning with the Capricorn Enterprise members networking evening Wednesday night which will be followed with further information sessions in Brisbane and on the Gold Coast”.

The Capricorn Enterprise Wednesday networking evening consists of Capricorn members from Queensland. As a group, one of their goals is to “help secure funding for major projects and support for essential infrastructure”.

Mary Carroll, CEO said that they are excited to be offered the opportunity to share information at the Wednesday members networking night.

“Our members will be offered first-hand information about this exciting project. We’ll also have the opportunity to discuss just how beneficial a project of this magnitude will be for the Capricorn Coast”.

More information on the info sessions as well as how you can attend can be found here.