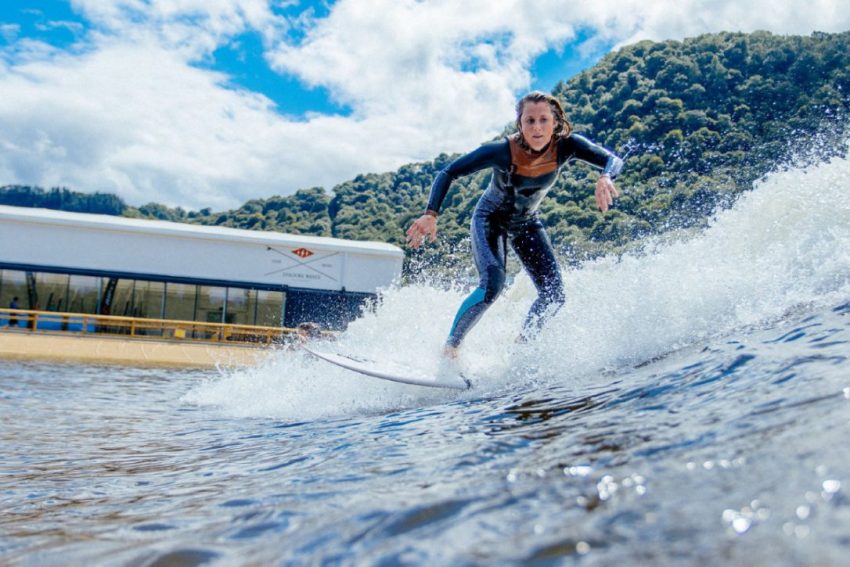 The world-first inland surf lagoon in the Conwy Valley opened to global media interest in August 2015 but suffered a number of mechanical failures in the first year.

But now after a near full season of surfing they have unveiled stunning visitor numbers – which included 18,000 people from overseas. There were 50,000 surf sessions on the lagoon.

Watch the UK Pro Surf Tour at Surf Snowdonia below and read the full story here.

They now intend to extend the surfing season further into the winter after solving a minor maintenance issue and following demand for surfers.

Bosses at the £15m facility said they had created 95 jobs.

Managing director Andy Ainscough said: “The majority of our visitors live within a two-hour-drive radius, with London and the South West also making up a significant part of our UK market.

“We expected a certain level of international interest when we launched based on the press coverage we had in various territories.

“But that initial interest shows no sign of waning – we are still seeing a significant proportion of our visitors – around 12% – coming from overseas.

“That equates to around 18,000 international visitors coming to North Wales this year to enjoy a surf, inland, seven miles from the sea.

“That makes us smile for all sorts of reasons.”

In its first full year of operation Surf Snowdonia was named as one of the world’s Top 20 Most Extreme Adventures by travelsupermarket.com and starred in a £2.5 million TV Advert for Visit Britain.

It has been called “the most headline-stealing example of North Wales’ reinvention” by Lonely Planet when it listed North Wales as number 4 in the World’s Top Regions to Visit in 2017.

Jim Jones, managing director of regional marketing agency Go North Wales, said: “North Wales is at the centre of the growing adventure holiday market and is earning recognition as a world leader as demonstrated recently by the Lonely Planet accolade, which specifically referenced Surf Snowdonia.

“Developments like Surf Snowdonia have become real game changers for the region.

“It is a very special place – not only because it is a world-first commercial inland surfing lagoon – but because it is an attraction and destination that appeals to all generations.

“From my perspective it has made my job of promoting the North Wales region to the world a whole lot easier.”

In October 2016 Surf Snowdonia became the first ever inland stop on the UK Pro Surf Tour when it hosted the Surf Snowdonia Pro Surf Challenge in partnership with Conwy County Borough Council.

The event drew 2,000 surf fans from across the country to watch the UK’s best pro surfers take part in an unprecedented inland competition.

As well as attracting visitors and creating jobs Surf Snowdonia launched a community initiative in the form of the Dyffryn Valley Surf Club.

At £3 per session per week, the club makes surfing affordable and accessible to local youngsters who might otherwise find it difficult to access the sport.

The Wave Project, a charity which uses surfing a tool to help local youngsters struggling with mental health and confidence issues, is also a regular visitor to the facility.

Managing director, Andy Ainscough said: “It’s been a phenomenal year for us – hard work but very gratifying to see how our offer and our team has evolved over the last 12 months.

“We’ve always wanted to deliver a world-class experience in what is a world-class destination. North Wales is a stunning region and it’s a real privilege to be able to live and work here.

“It’s great to see the region starting to get the recognition it so richly deserves and see inbound visitor numbers steadily increasing.

“At the same time, Surf Snowdonia is also very much a facility for local people, and we see initiatives like the Dyffryn Valley Surf Club as a really meaningful way for us to give something back to the amazing community where we have made our home.

“We have some more exciting development plans in the pipeline and will continue to build on what has been a very solid first full year.