For over a decade Greg Cruse has been an integral part of nurturing and growing the sport of surfing in America. A few years back Cruse helped reorganize Surfing America into USA Surfing, creating a clear and defined governing body for surfing in the states. Now serving as CEO, Cruse is leading the USA Team — Kolohe Andino, John Florence, Carissa Moore and Caroline Marks — into Japan for the 2021 Olympic Games. It’ll be surfing’s first inclusion on the world’s biggest stage.

Before the Games had to be delayed a year because of the COVID-19 crisis, Cruse and USA Surfing had plans to train Team USA at the BSR Surf Resort in Waco, Texas. Just a few years ago who would have thought that possible? The best surfers in the world training for the biggest sporting event of their lives in a pool in Texas. That’s some trippy stuff.

We called Cruse up to have a chat about how wave pools fit into the future of USA Surfing and the Olympics.

For starters, what’s your personal take on wave pools?

Cruse: I think they’re pretty cool. The one thing about surfing is it’s not very democratic — I’ve always said you’re either a surf bum or an entrepreneur if you surf. Those are two of the best ways to figure out how to live along the coast where life is notoriously expensive. It can be difficult for people who live inland to get to the beach and participate, so there are a lot of under served markets.

With wave pools spreading out around the world it’ll be really cool to watch them get more kids involved in the sport who normally wouldn’t get that opportunity. There is a lot of talent out there. And while it’s still expensive to go to wave pools, they will eventually have programs for kids, like the Boys & Girls club and the YMCA do. At that point surfing starts to become like other sports, like golf, skateboarding, or snowboarding, where both the cost and access is not so prohibitive.

That’s one of the most under-appreciated pluses to the wave pool world: Introducing the sport to kids who would have never had the opportunity.

Exactly. The lifeguard at BSR didn’t surf when he got hired — he was just a swimmer. He’s been lifeguarding there for a couple years now and because he gets to surf the wave he’s actually a pretty good surfer already. You’d be shocked.

I was actually there last October. He’s doing airs already!

Is he really? That’s exactly what I’m talking about. That section is hard even for good surfers, so it’s saying a lot that he’s gotten a feel for it so quickly.

How many pools have you visited?

My first experience with a wavepool was when we had Crosby Colapinto, Cole Houshmand, Alyssa Spencer and Sam Sibley over to the Wavegarden Cove in Spain when it was in the testing phase, and they just loved it. They surfed for an hour and half and were totally surfed out afterwards. I’ve also visited the BSR Park in Waco a couple of times now, and I’ve been to The Surf Ranch for the WSL events, but I haven’t gotten the opportunity to surf that one yet.

It’s way different because you have repetition, so you can work on things. And it allows you to treat young surfers the same way you would treat young Olympians in other sports. Before the pools, that sort of training just wasn’t really possible. That repetition is the key to learning and progressing. Our first training trip to BSR we had Caitlin Simmers, and she was working on that air section. She went from landing a little stock air pretty quickly, to going for air reverses — and landing them regularly — to doing a full rotation and riding out of it. That was all in two sessions out there. You just don’t get those opportunities in the ocean. You can be out all day and not get that one air section.

Or even all year.

True. And in the pool you can try something, dial it up on video, and then go straight back out and try it again. Being able to have that repetition and evaluation, that’s the key to progress. And it’s [wave pools] close enough to the real thing that it’s not some big deviation to ocean surfing. I’m sure that surfers that learn in wave pools will have a difficult time going out in the ocean, but well-rounded surfers with ocean experience that come to a wave pool to work on particular things, it’s gonna be good for them. I think big progression is gonna happen in pools that will translate back into the natural environment, as well. So its a two way street. And we already see it happening.

Before the Olympics were postponed until 2021, was BSR — or any other pool — a part of the training plans for the USA Olympic Team?

Yes, but we have the best surfers in the world on the team, and they already have a crazy international travel schedule and a lot of prior commitments between sponsors, the WSL, Red Bull, etc. So, before all this COVID-19 stuff, we were trying to schedule a session at BSR in preparation for the beach break surf in Japan, and that’s something still in the cards now that it’s been delayed a year. The desire is definitely there. I imagine we’ll put it together. There’s also another pool using the American Wave Machines Technology being built in our host city in Japan. We’ll likely do a training session there before The Olympics in 2021.

The first time we see surfing in the Olympics it will be in the ocean in Japan. Which feels right. But do you feel that wave pools should be given some consideration eventually?

Yeah, but with a couple caveats. Everybody needs equal access to the venue first. It’s like, if you have a velodrome for cycling, and no other country has one, you can’t expect people to race it in the Olympics. That’d be totally unfair. So that’s the biggest thing that needs to happen.

The next two Olympics, after Japan, are in Paris and Los Angeles. Paris is going to be at Teahupo’o, in Tahiti — which could be pretty radical — and then LA is already talking about Huntington and Trestles, and HB has been pushing hard for it. Then you have the Kelly Slater Wave Pool which isn’t too far away, and you’ll also have three or four more pools in the Palm Desert by then. So, all those will certainly be vying for Olympic consideration, but I can’t imagine California not hosting them in the ocean.

That’s the dilemma. They [Olympic committee] almost have to come down with an edict saying, “OK, Olympic surfing is always going to be in a Kelly Slater Wave Pool, or an American Wave Machines pool”, so that countries that want to put together a training facility can build the same pool and run it under the same Olympic settings. Right now that’s a difficult decision to make. And I know with Japan, the reason they added surfing to the Games is because there is a vibrant surf culture there and a lot of beautiful beaches that people don’t realize, and all of the youth are being drawn away from the coast to Tokyo to work. The average age in Shimoda is like 62 years old. So they are trying to draw more youth to the coast to reinvigorate those areas. Those were a few of their [Japan’s] reasons for adding surfing, so even if the right pool was ready in time, it’s probably not something they would have considered. Unless there was a proximal pool to the natural ocean site.

The US Championships are at Trestles. Any chance we’ll see them in a pool in the future?

As long as Trestles is on the table, probably not. That’s where everybody wants to surf [laughs]. But that depends on what happens with their lease with Camp Pendelton. I definitely wouldn’t ever rule it out. I think the wave pools are a huge part of what surfing will look like in the future. But for now, Trestles is definitely the preferable venue for most people. 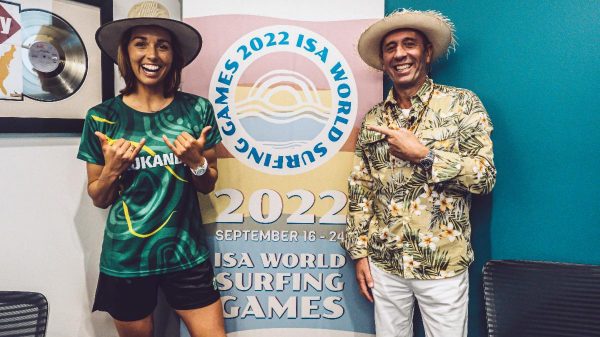