John John also popped into the Wavegarden during his time in Spain to ride the half pipe and the prototype surf lagoon, and included a couple waves from his session in the edit (Starting at the 3:20 mark). — Video below 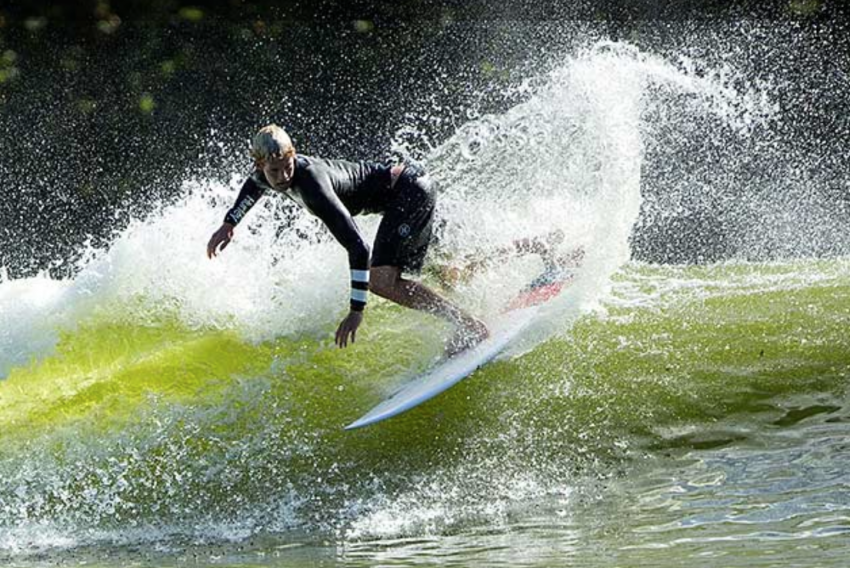 “John wanted to give it a try and see how fun it was,” says the photographer, Mr Alex Laurel. “I was a bit in that same ‘fun’ kind of approach. It’s not a performance wave but the surroundings are pretty mental, lost in land, deep in the Basque Country, next to a river going through a forest. Well, not a performance wave until John gets in and carves the shit out of it. The place is rad. You just have to press a button to start the session. No tides to deal with, no swell charts to read and a wooden deck instead of sand-dunes to cross to get in the water. Once you finish your ride, let’s say a righthander, you don’t have to paddle back out ‘cause a left starts two minutes after at the exact spot where you kicked out on your first ride. Such a lazy-man surf spot. But why make it harder when you can make it easy? The whole scene was a good combination to try something a bit more creative than shooting your regular surf spot. The forest is about 50 metres behind the wave so I’ve pulled out a 90mm that is made to shoot architecture, originally. The forest was pretty massive compared to John so I was using this tool to make him stand out. At first we were down for a little two-hour session but I think we ended up staying for almost four hours. After the session, John just had to put his skate shoes back on, ready to sweat it out on a mini-ramp next to the pool. Just bring a DJ, light up a barbecue with a few beers and I think you could have a f***ing great day.”