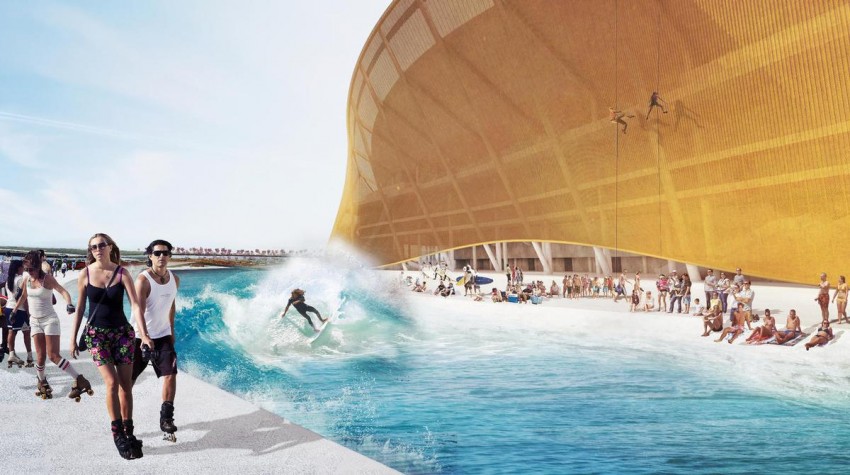 A newly-released rendering shows bathers relaxing on a strip of man-made beach, rollerskaters circling the concourse, abseilers descending the stadium and a surfer catching a large wave in the moat. Source: CBS

After months of speculation, National Football League (NFL) franchise the Washington Redskins has finally confirmed architects Bjarke Ingels Group (BIG) will design its new home, and unveiled the first details of the project.

Described by the Redskins as “a new stadium concept”, BIG’s creation – a transparent wave-like structure – is designed with a particular focus on how it will be used on non-match days throughout the year.

The ground will be surrounded by a moat for surfers and kayakers, which is crossed by bridges linking the stadium with surrounding parks and green space. A newly-released rendering also shows bathers relaxing on a strip of man-made beach, rollerskaters circling the concourse, abseilers descending the stadium and a surfer catching a large wave in the moat. 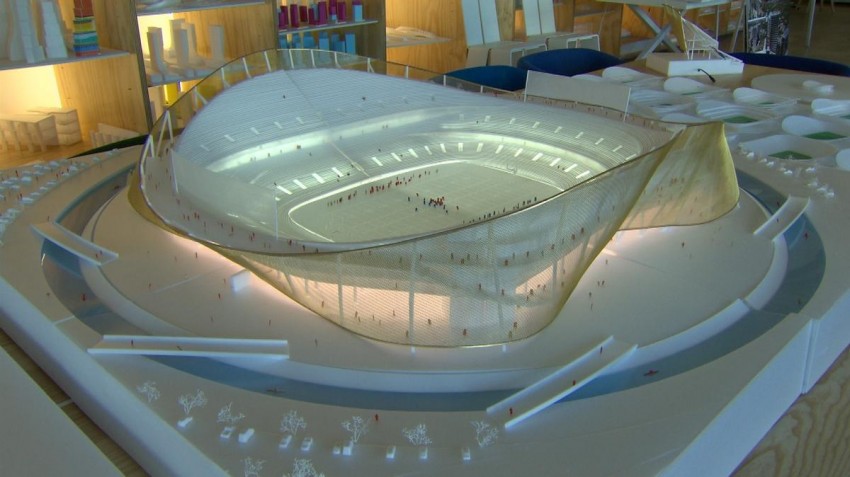 The stadium will be a semi-transparent wave-like structure surrounded by a surf moat. Source: CBS

“The one thing that everybody is excited about is the idea that the stadium is designed as much for the tailgating, or pre-game events, as the game itself,” said Bjarke Ingels in an interview with CBS show 60 Minutes on 13 March. “Tailgating literally becomes a picnic in the park.

“We have found a way to make the stadium a more lively destination throughout the year without ruining the turf for the football game.”

Further information about BIG’s design – their first large stadium project – has yet to be released.

Redskins owner Dan Snyder wants to relocate the franchise from its current 82,000-capacity ground at FedEx Field in the state of Maryland – which it has occupied since 1997 – and build a new stadium elsewhere in the region. No location has yet been selected.

According to media reports in the US, government officials in Virginia, Maryland and the District of Columbia have tabled site proposals for the new stadium, but the team may have to change its controversial name and logo – considered by some to be offensive to Native American groups – before any move will get the green light.

BIG have experience working on high-profile projects in Washington D.C, having designed the masterplan for a US$2bn (€1.8bn, £1.4bn) re-imagining of the city’s Smithsonian Institution.

In the 60 Minutes interview, Ingels said he was determined to disrupt expectations of what modern architecture should be. “When I started studying architecture, people would say, ‘Can you tell me why are all modern buildings so boring?’,” he added. “People had this idea that in the good old days architecture had ornaments and little towers and spires and gargoyles, and today, it has just become very practical.”

Original article on CLAD Global or see the release on the Redskins website.