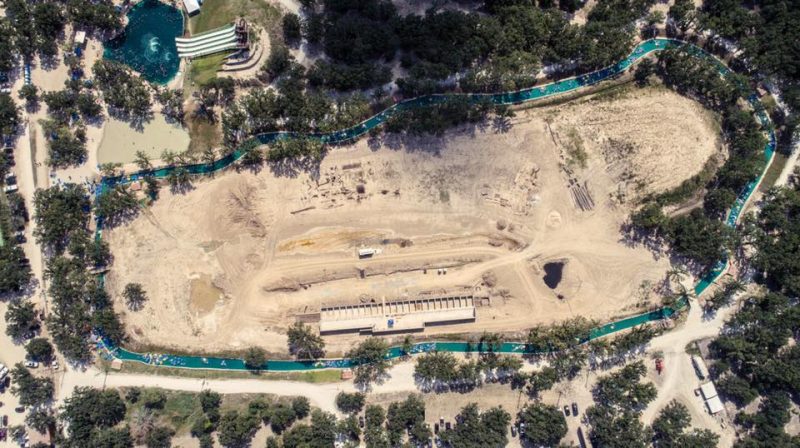 Birdseye view of the new best surf spot in the Mid-West Photo: BSR

A few months back we introduced you to Barefoot Surf Resort (BSR) in Waco, Texas. You heard Jamie O’Brien and Cheyne Magnusson talk about the different waves that they designed with the AWM team. As well you saw small-scale proof of concept waves in the factory. Today, we bring you an update with more than just artistically rendered blueprints. BSR is extremely close to completion and we would like to share this build with everyone who is interested in how these guys are essentially recreating one of natures most beautiful acts- waves. We don’t have much time left until we see Jamie O’Brien and Cheyne Magnusson testing these waves out, inside of two months at the most. At the bottom of the page, we’ve listed the prices to surf the resort.

The air chambers that will provide the waves at BSR. Photo: BSR

The waves this pool will create are “circular particle motion waves”

AWM is calling it the most authentic surfing experience outside of the ocean. The energy is shot out of these air chambers using different patterns and sequences, allowing them to create any wave they want.

It takes a lot of energy to recreate nature. Photo: BSR

This transformer will help create the energy needed to produce the PerfectSwell™ waves. They wave pool sits alongside the Lazy River at BSR. Your friend will be cruising by drinking a beer while you get tubed.

Soon to be covered in white sand and peaky beachies. Photo: BSR

This is truly a massive area, by looking at this photo you can see how dense the surrounding area is. The 500-acre facility is a ranch, with big game roaming around it will almost be as if you’re surfing in a wildlife sanctuary. Bruce McFarland, President of AWM, said,

“I saw more wildlife in 4 hours at BSR than I’ve seen in years of hiking and mountain biking.”

Plans for their infinity pool with a swim bar. All part of their “surf resort” plan. Photo: BSR

BSR is building cabins, pro shop, bar/grill and a surf shop. Their plans are in the books and they’ve already begun construction. They haven’t shared photos of the process yet, as they are waiting for nice weather to lay down the lining.

A 120-foot tall water slide, a 3,600-foot long lazy river, a wakeboard cable park, and now a surf resort. This is like a Disneyland for surfers. Pretty soon there will be 13-year old kids from Waco surfing better than you or I.

The team says that they will be ready to start testing waves in March and crossing their fingers to open the doors in April. We know that Jamie O’Brien and Cheyne Magnusson are the pros that are onboard with AWM. Once March arrives we’ll see the true potential of this lake.