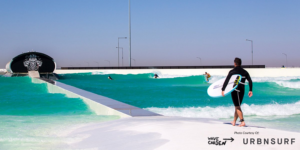 A view of whats to come at URBNSurf Melbourne. Photo: URBNSurf

They’re not stopping in Melbourne. They’ve set their minds on creating ten surf parks in Australia by 2028. Whether or not URBNSURF already has other locations in mind is unknown. Including Surf Lakes in Queensland, Aussie’s will have four world-class, man-made waves before we hit the year 2020.

Surfers aren’t the only ones that benefit from surf parks popping up around Australia (and the world). The development of URBNSURF Melbourne is expected to generate over 300 jobs during the construction phase. Another 50 full-time jobs will be available once the facility is operational. Assuming the same numbers for the other URBNSURF locations that’s nearly 1,000 jobs and 150 full-time positions.

State Member for Sunbury, the Hon. Josh Bull MP, said “this announcement is fantastic for Tullamarine and the people of the Northen Suburbs. I am incredibly excited to see the surf park built, creating an estimated 300 jobs during construction and 50 ongoing jobs. This will be a world-class facility, attracting visitors not just from all over Victoria, but all over Australia.” 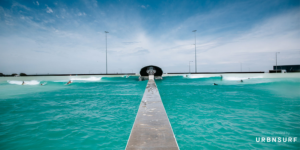 The Tullamarine Airport is using URBNSURF Melbourne as a kickoff for what they’re calling a new “experience center”. They would like to bring a whole new industry to the area, resulting in hundreds of more jobs later on.

Aussie’s will have four world-class, man-made waves before we hit the year 2020.

Melbourne Airport’s Chief of Property Linc Horton said “We’ve earmarked this precinct as an area where we can focus on building a real experience center – somewhere that not only develops the airport estate, but does so in a way that opens up new leisure experiences for the communities around the airport as well. Opening up this area of the airport for experiences  like URBNSURF Melbourne will bring a whole new industry to the area, resulting in hundreds of additional jobs being established at the airport and a new world of opportunity for young people from the suburbs surrounding it.”

This will be the first commercial surf park in the world to host Wavegarden’s “Cove” technology. Something that surfers around the world have been drooling over ever since they introduced it to the surf world.

Laura Cavallo, Destination Melbourne’s CEO, said “Being so close to the airport, this development will further cement the area as a gateway into Melbourne and the surrounding suburbs, spreading visitation and spend beyond the CBD (Central Business District). URBNSURF Melbourne will provide immensely great value to the local community and to Melbourne overall.”

They are creating waves, surfers, stoke, and baskets full of jobs. The enthusiasm of the project extends all the way to the Mayor’s office with Hume City Council’s Mayor, Geoff Porter adding “at Hume City Council, we’re all about local jobs for local people. I am delighted this project will create a number of jobs in the city of Hume both during the construction phase, and ongoing once Australia’s first surf park opens in 2019.”

We will keep you updated on all URBNSURF projects and future job openings for each of the surf parks in Australia, as well as the world.