Today, URBNSURF, powered by Wavegarden Cove® technology, announced that their application for URBNSURF Sydney has been granted. Since surfing is now an Olympic Sport, URBNSURF is slated to be the training facility for the Australian Olympic surf team. Surfing has the highest participation rate of any sport in the country. With that, they expect to generate over $250 million in economic contributions to Western Sydney throughout their operation.

In 2016 URBNSURF was nominated as the optimal project for the Sydney Olympic Park. The next year in 2017, they submitted their state development application to the NSW Department of Planning and Environment. This went through a critical assessment and review process. Today, all is approved and they are moving forward with their development plans.

Andrew Ross, Founder and Chairmen of URBNSURF said, “we’re absolutely delighted to receive development consent for URBNSURF Sydney, and are excited to work with the Sydney Olympic Park Authority to bring a world-class sport, recreation and leisure destination to Western Sydney in 2019.” 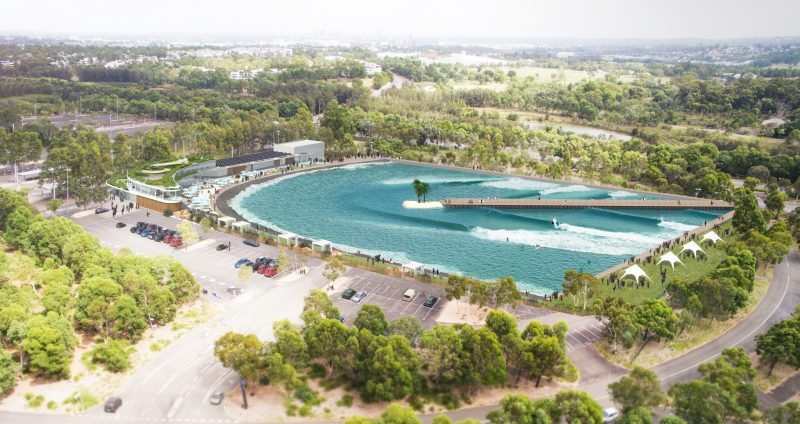 Andrew went on to talk about the specifics of the wave technology:

“URBNSURF Sydney will be capable of generating up to 1,000 surfing waves, of up to 2 meters in height every hour, and will provide customized surfing experiences to suit all levels and board types.”

URBNSURF is trying to take the ‘guesswork’ out of surfing. They want to offer Sydney’s 200,000+ surfers, residents and visitors, the opportunity to surf in a safe, convenient, and consistent environment.

The size of the surfing lagoon is set at 2.0 hectare (about 4.9 acres). They plan to offer a myriad of attractions, consisting of but not limited to:

URBNSURF will also be hosting a number of cultural, food, music, film and art festivals. Not to mention the best part, professional and amateur surfing competitions.

“Surfing NSW is excited to see the development of URBNSURF Sydney heading in the right direction, towards the creation of a world-class surf park in Western Australia,” says Luke Madden, CEO of Surfing NSW.

This location will be a big boost to Surfing NSW and their programs. Bringing surfing and stoke to a massive amount of people, that wouldn’t ordinarily have surfing in their backyard or down the street.

Currently, the company is also developing two other surf parks, one in Melbourne and the other in Perth. They hope to have ten world-class surf parks in Australia by 2027.

The Sydney project aims to break ground at the Olympic Park by late-2018. They expect to be operational by summer 2020.