URBNsurf has reiterated its commitment to Jandakot as the home of Perth’s first wave park.

Jandakot first emerged as a prospective wave park location in late 2019 after the State Government entered into discussions with the company for a 5.7ha site on Prinsep Road, in close proximity to the Kwinana Freeway and Armadale Road.

The City of Stirling recently emerged as another contender for Perth’s first wave park, after mayor Mark Irwin confirmed they had preliminary discussions with two proponents.

However, Urbnsurf chief executive Damon Tudor said Jandakot was still the apple of their eye when it came to establishing the state’s first wave park.

“We are absolutely committed and have lodged a formal proposal with the WA Government which is currently assessing that proposal,” he said.

“Jandakot is the only location currently under consideration by the WA Government.

We welcome the interest the City of Stirling has expressed about a potential wave park in their area, and this shows the demand that exists across Perth.

However, the only location currently under consideration by the WA Government is in Jandakot and any comments about a project in the City of Stirling would be premature.”

There are currently two bids for the block on Prinsep Road, with the other submitted by rival wave park start-up Aventuur, which boasts Urbnsurf founder Andrew Ross as a partner.

The site is just a stone’s throw from Cockburn Central Station and the soon-to-be-completed North Lake Road and Armadale Road flyover bridge.

Having previously spoken of a desire to begin work in early 2022, with the mooted facility to be ready by the first quarter of 2023, Mr. Tudor was confident it was still a realistic goal, pending government support.

“We hope to meet the timelines we have mentioned previously, but we cannot be definitive until we get a decision from Government,” he said.

“With our proposal, we are confident of a shorter delivery time frame against other developers.”

Mr. Tudor said if they were given the go-ahead, the wave park would be ecologically sustainable and could cater to more than 300,000 visitors annually, with plans for on-site accommodation.

Featuring technology provided by Endless Surf, the park would offer a different wave experience to Urbnsurf’s other locations in Tullamarine (Melbourne) and Western Sydney.

Urbnsurf had previously targeted Tompkins Park in Alfred Cove as their preferred location, only to face stiff opposition from local residents.

The polarising proposal was eventually left dead in the water when the state government rejected an application from the City of Melville to use Crown land for the project. 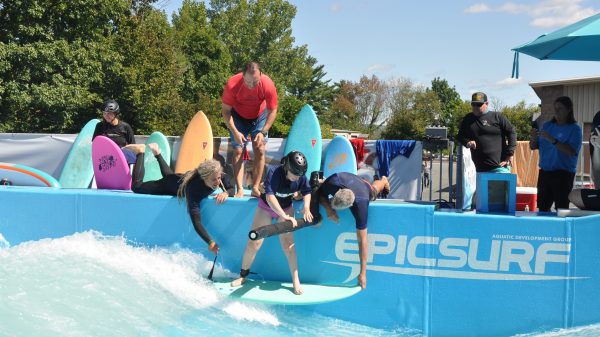