It’s been 4-years since the first clip of artificial perfection at Kelly Slater’s Surf Ranch in Lemoore, CA nearly broke the internet. Yet, despite the amazing proof-of-concept, there still isn’t a publicly available version of The Surf Ranch up-and-running anywhere.

Fortunately, that’s about to change. Andrew Stark, APAC General Manager for the Kelly Slater Wave Co, is spearheading The Surf Ranch Sunshine Coast project, and hopes to break ground later this year. (As reported here last week, another development using the Slater Wave Co tech — The Coral Mountain Resort in Palm Springs, California — is also in the works. If successful, the United States and OZ will both have public Slater Wave Co pools in the very near future.)

The Surf Ranch Sunshine Coast will be located on a 510 hectare site in Coolum, and according to the website, “is proposed to include the development of a 6-star eco-lodge, event and training facilities, tourism accommodation, indigenous cultural experiences, a school, farm-to-plate cuisine and other food and beverage experiences, a micro-brewery, residential development, vast green public spaces, public waterways, beaches and an environmental experience centre.”

Just the other day, Don O’Rorke, the Executive Chairman of Consolidated Properties Group, sat down with Stark to discuss the project. While the full interview from YouTube is embedded at the bottom of this post, we’ve transcribed the pertinent details below.

How are you feeling about the Surf Ranch Sunshine Coast project at the moment?

Really excited. It’s given us the opportunity to look at Kelly Slater Wave Company and how that sits strategically within the World Surf League. We’ve got our application in with the state government to receive approval to be able to commence building. With COVID-19, what that creates is the real, genuine need for jobs and economic prosperity and stimulus. So, together with CPG [Consolidated Properties Group] and our building partners [Hutchinson Builders], we’re ready to go. I think that presents the state government with an incredibly powerful economic opportunity. And from the Sunshine Coast perspective, it’s a really amazing tourism facility and destination that can bring life to the area during what’s going to be a very difficult period.

How many jobs is the Surf Ranch Sunshine Coast going to generate?

It’ll generate 10,000 jobs over the next 10 years. But, what’s also important, is the immediacy of the job creation. If we can start by the end of the year, we can have 300 people employed by Christmas. So, that type of economic job stimulus is important to Queensland, and we’re a proud organization to be able to provide that.

And those are jobs for people living in that region. Generated locally, and for the local community.

Absolutely. It’s a local job creation scheme, but it’s also got international flavor. It’ll be a globally recognized tourist destination, which we think is really exciting for a region staring at some tough times with the COVID-19 crisis.

For those who might not know, can you tell us exactly what a Kelly Slater Wave Pool is?

The wave is…there’s nothing like it in the world. It’s the biggest, the best, the longest, the most in-synch with what a perfect natural wave in the ocean would feel and look like. It’s a 55 second wave. It’s got a 15-second tube ride through the middle. We’ve run World Tour events in it. It’s got 50 different settings for beginner, intermediate and advanced, but it’s got the power and the energy of a really strong ocean wave. There’s a lot of other wave technologies out there, but ours is the market leader in terms of the quality of the wave, and the experience of being there.

This will be the first one [Kelly Slater Wave Co pool] built outside of North America, correct?

Yes, and that’s exciting for Australia and The Sunshine Coast. This particular facility is the one we feel the most confident starting and getting open first. We’ll also have events there, which is part of the broader strategy and business plan. And it won’t be just the World Tour events like you saw in Lemoore, California. It’ll be Junior events, Boardriders events, Qualifying series events, and quite possibly the Olympics in 2032 if that transpires for southeast Queensland. Plus there’s a music amphitheater that sits alongside the wavepool, and creates another opportunity to sync surfing with music, lifestyle, and all of those things as well.

On a comparative level, we’ve seen URBNSurf open in Melbourne, and that’s been tremendously successful, which I think is a really good endorsement for this concept. But can you talk the difference between the two waves, and how you feel about the URBNSurf experience?

I think URBNSurf is great. It’s a really good facility, and it’s fun. It’s a slightly different model, it’s more of a high-volume theme park model, where they have as many as 36 people in the water at once and the wave is a lot shorter. It’s a 12-second wave as opposed to a 55-second wave. But there’s definitely a marketplace for both.

The success of URBNSurf has endorsed The Surf Ranch Sunshine Coast, because it proves the market wants this sort of experience.

Definitely. And I think they are overwhelmed by the success, in terms of how quickly they book out and the numbers. I’ve spoken to people that have been there and been back so many times already, and that’s a great indicator. There’s definitely a market in Australia for this product.

For the Surf Ranch Sunshine Coast, what’s the next step?

We’ll continue to lean into the community consolation. We’ve had great discussions with a lot of community groups in that region already. That’s really important — to make sure the community are aware of what stage we’re at and the broader development plans. Everybody sees the benefit of this long-term, so when we do eventually get final approval, we’ll be ready to go. 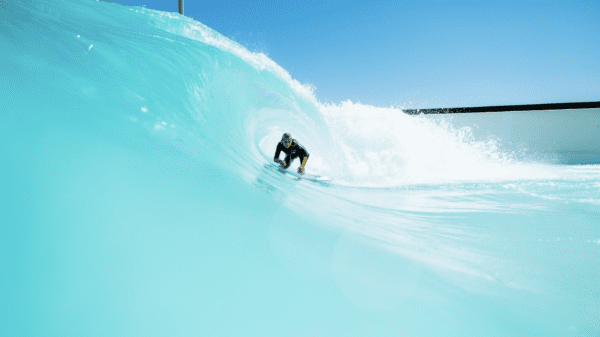 According to this end-of-year wrap from the crew at Urbnsurf, despite the Covid challenges of 2020, the Melbourne project was a smashing success. So...