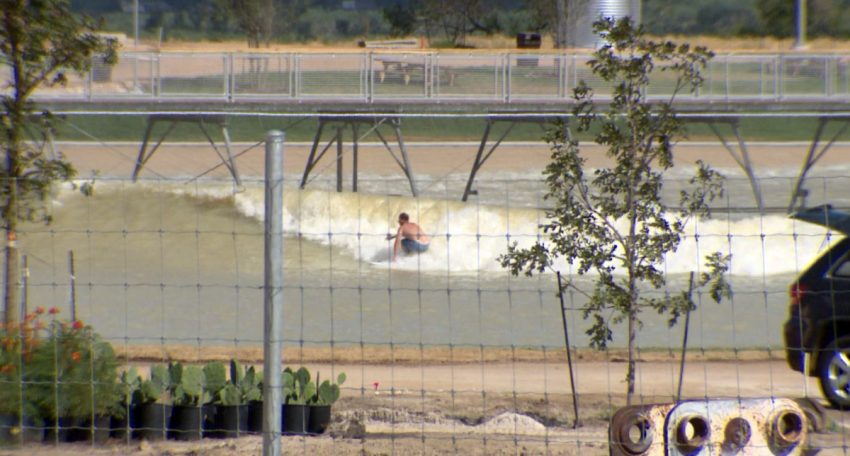 One of the first surfers to test the waves at NLand Surf Park in Austin, Texas. Photo: KXAN.com

AUSTIN (KXAN) — The Travis County Commissioners Court has sued NLand Surf Park to prevent the business from opening its pool. The county says the pool does not meet minimum safety requirements of a public pool under state law.

“In light of the suspected amoeba infection at a similarly-sized whitewater rafting course in Charlotte, N.C., which claimed the life of an 18-year-old patron, public health standards for man-made water courses must be taken seriously,” the county said in a statement Thursday.

Nine cases have been reported in Texas since 2005, resulting in eight deaths, including a recent cases of a teen in Harris County.

Wednesday, NLand sued the county, accusing them of treating their company differently than other similar businesses, including Quest ATX and Next Level Ride Austin, both cable-based wakeboard water parks.

The surf park says their water quality once open will meet or exceed safety benchmarks required for recreational bodies of water. NLand says the county has refused to visit the site or test the water.

The county says there is no debate the surf park is a pool. “The debate is whether it should be treated differently from other pools because of its unique characteristics,” the statement said.

The county says the lined pool will cover approximately 10 acres, within a 160-acre property, “It will be filled with approximately 11 million gallons of non-potable rainwater run-off, and that water will not be circulated, filtered nor treated in the manner required for pools under state law.”

“The developer has not yet applied for the necessary permits (much less been granted a variance) under state law,” the statement continues, noting discussions with the developer began at least two years ago.

The county says the park’s developer asserted the pool will be open to the public within weeks.

The surf park is located east of the SH 130 and SH 71 interchange, or east of Austin-Bergstrom International Airport. The park’s website still shows that it will open in 2016.