Surf Lakes is a wave manufacturing company that is designing waves unlike any that we have seen thus far on the market. Unlike Wavegarden or KSWC there are no moving objects being pulled through the water. Also different than anything else we’ve seen, their technology is claimed to produce eight separate point-break style waves at the same time. This will allow surfers of different or similar levels to surf simultaneously. 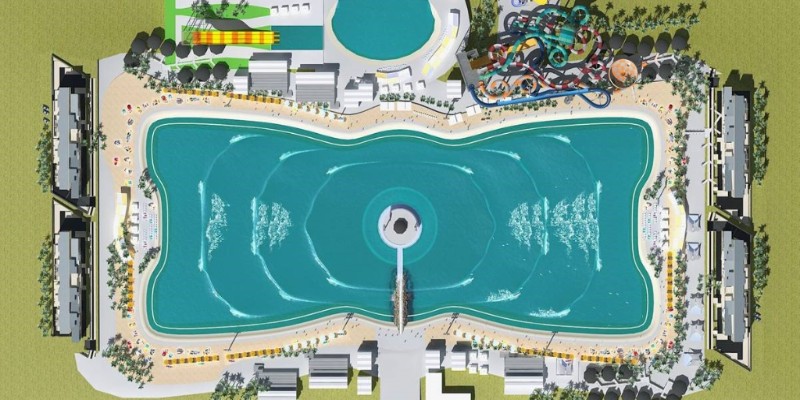 They start with a large man-made lake, coming in at 200m long x 150m wide, that’s roughly 656 feet x 492 feet. In the middle of the lake is a large wave generator which pumps out a single, large concentric wave which then radiates outward towards the break sites. Once the wave hits the individual reefs a wave will run the length of the bottom contour, ending on the shoreline. Their bottom contours have been designed using CFD computer modeling. These aren’t just one off waves every couple of minutes, Surf Lakes is capable of pumping out six wave sets with a small break in-between. The waves can be set from 1m (3ft) up to 2.4m (8ft).

The goal of Surf Lakes is to license out their technology in order to develop a handful (or two) multipurpose, high output surf parks/stadiums around the world as commercially attractive stand-alone businesses. The technology can be itself a stand-alone park but apart from that, they can be placed in existing theme parks or close to other tourist attractions. Attracting surf competitions, commercial merchandising and other extreme sports opportunities.

The team over at Surf Lakes™ in Australia is well into their first build of a full-scale prototype in Rockhampton Queensland. They’ve set a completion date for roughly around April of 2018. Upon completion, they’ll be hosting live demonstrations to media as well as interested licensees of the technology. At first, this location will be for prototype and fine-tuning purposes, however soon after they’re planning on opening up to the public. They’ll let us know about that as we get closer.

How to license Surf Lakes tech for private operation

Surf Lakes™ would like to license the technology to various regions and countries around the world. They will manage the construction and commissioning of each facility and continue to monitor and maintain them. Licensees will be left to their own devices for the marketing, management and day to day operations of their specific site.

This technology is the lowest cost wave generation to hit the market with a high output, capable of producing 2,400 waves per hour.

The steps to inquire about licensing opportunities are as follows:

-Heads of Agreement signed with $50k deposit. Giving you the first right of refusal to your territory.

-Inspection/demonstration of full-scale Surf Lake in QLD in April/May.

-Following the inspection, sign full Licensing Agreement and payment of the balance of Licensing Fee.